Chekara combines flamenco dance with the Andalusian music of Morocco known as al-ala, which originated in the courts of Seville, Granada and Córdoba during the Golden Age of Al-Andalus (9th-13th centuries)- a time when Muslims, Christians and Jews coexisted in southern Spain. 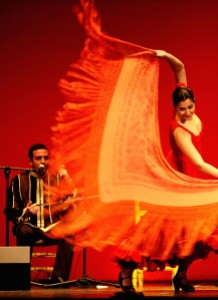 With its haunting tunes, rhythmic beats, and passionate voices, Chekara preserves the rich musical heritage of Christians, Moriscos and Gypsies. Chekara offers a natural synthesis of various musical forms (eastern Arab, Maghreb Berber and traditional music from the Iberian Peninsula) along with a later genre, flamenco.

In the last several years the orchestra has given more than 250 performances at events and festivals around the world.

Chekara is bringing the group’s second project Tan cerca, tan lejos (So near, so far) to Asia for the first time at George Town Festival. Produced with Estrella Morente, who has been described as “flamenco royalty” and is the voice behind Penélope Cruz’s flamenco song in Volver, this project pays homage to the famous flamenco figure Enrique Morente.

On this tour, Jallal Chekara, violinist and singer and director of the orquestra, will be accompanied by José Manuel Tudela on guitar, the singer (cantaora) Rosa de Algeciras and the dancer (bailaora) Mari Ángeles Gabaldón.

The performance will last 75 minutes, with no intermission, and takes place at the Town Hall on the Esplanade. Tickets cost RM 65, and can be purchased at the George
Town Festival Office on Armenian Street, or at http://redtix.airasia.com/events/Chekara.