This will be a rather elegant afternoon at Suffolk House as Ensemble Koschka performs pieces by Bach, Haydn, Hoffmeister, Mozart, Pachelbel and more during this 70 minute concert. Tea and cakes will be served after the concert. 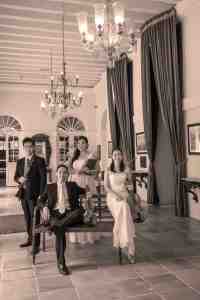 Suffolk House is the site of the residence of Francis Light, the founder of the British settlement on the Prince of Wales Island, commonly known as Penang Island. The music to be performed was all composed and regularly performed in the late 18th Century, and we can imagine that the early Penang settlers might have enjoyed performances similar to this.

Since its inception in 2008, Ensemble Koschka has performed dozens of concerts in Penang with the aim of promoting classical music locally. The ensemble has also been on tour to Japan, performing a combination of classical music and arrangements of Malaysian folk songs.

Tickets are sold out through the George Town Festival office and website, but we have four tickets available for purchase. If you are interested, please email us at penangfreesheet@gmail.com.

7th at 3pm (doors open at 2.30pm), and tickets are RM 30, including refreshments following the concert. Suffolk House is at 250, Jalan Air Hitam.